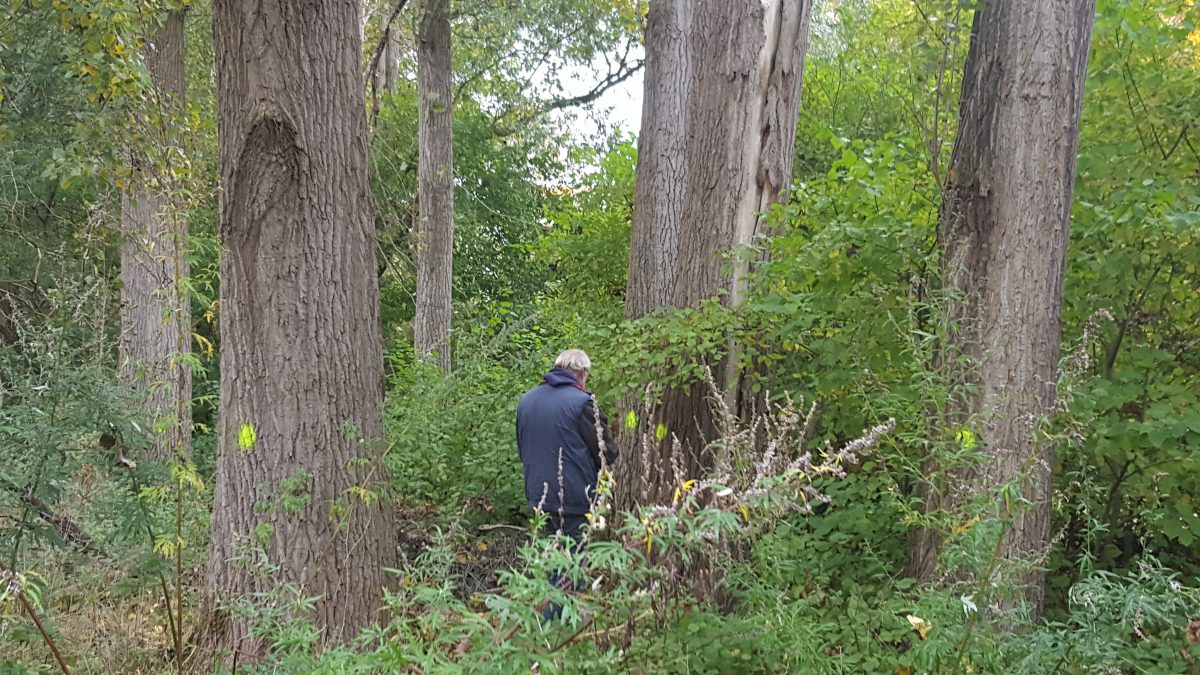 Here we are at the Selwerderhof cemetery, a beautifully verdant cemetery designed by the landscape architect Vroom. It was constructed between 1940 and 1949 with occasional short interruptions due to World War II. In 1948 the cemetery received its official name: Selwerderhof. The cemetery is characterized by its partition into different parts, not only are there several small cemeteries, such as the Islamic cemetery and the Jewish cemetery, but also at the architectural level there are different parts. For example, this is a very green section. However, more and more trees are being felled lately, and also more and more tree felling is planned. So what does this do to the area’s biodiversity? It’s time to ask biologist Hans van der Lans some questions.

Hello Hans, could you briefly introduce yourself?

Yes I would. We are now in a place that I like myself, because it’s about nature. That’s my background: forestry and forest ecology. Old trees are what’s at stake in this field, and here we are at a place in the Selwerdhof where we can find precisely those old trees, so that’s my specialty. Sometimes I go to Germany to look at old trees, or to England to look at the remnants of virgin forests, you can still find them there; we don’t have them in the Netherlands. But we are now in a place, a section of ecology within the Selwerderhof, where we can still see some old trees. The funny thing is, those old trees often have to go, because it’s neater or for safety reasons. Well, that’s horrible.

Why, what is the importance of old trees in a place like this?

An old tree automatically develops rotten spots. You might say: “Rotten spot? Well, it’s a cemetery, that’s what you get”. But with a rotten spot you get hollow spaces, which are home to bats, woodpeckers, treecreepers and things like that, and all of these you can find here. But if you take those old poplars away, it simply means that the tree stock is rejuvenated, so a number of species disappear. Of course I’m not just talking about the large eye-catching animals, but also about the insects, it’s also about the spiders, it’s also about the beetle and the beetle larvae. All of those inhabit precisely those old trees.

So it actually affects the entire biodiversity?

Yes, it affects the entire biodiversity. And that’s not the only thing, they always use big machines to cut down the trees, so there’s driving everywhere and hence everything will be flattened. I also noticed that one of the plans they have is to clean this place up again, make it neat. Well, there’s a lot of dead wood here in these old forest patches, underneath and in between the vegetation, there are really zones full of dead wood. If you clean that up just for the sake of cleanliness, then everything that’s in there, there are ants in there, there are ant nests under there, there are probably hedgehogs and weasels under there, all of that is cleaned up and made barren.

So basically you’re saying, “that cleaning up, that shouldn’t happen at all”.

The Selwerderhof is part of the urban ecological zone that’s been designated here in Groningen, and these stretches of forest of the Selwerderhof, they’re not maintained as ecological, the only things that are taken into consideration are cleanliness and safety. Ecologists should be looking at these areas, and those “tree managers” who are always thinking about how a tree has to have a certain shape and needs to be pruned and needs to be maintained, they really shouldn’t be in charge of this at all. Ecologists have to look at this, and then of course you also have to look at safety, but the primary concern should be ecology, nature. And that doesn’t apply everywhere here in the cemetery, because there are also very neat parts, where the trees are neatly lined up, where you can prune neatly. But here we are more at the back of the Selwerderhof, precisely in that ecological zone.

Well, thank you very much, perhaps we could now go to another part of the cemetery so we can look at the surroundings there as well.

Here we are in another part of the cemetery, where as many as 40 poplars were recently cut down. New trees were planted, as you can see behind me. What are the consequences of planting new trees while cutting down the old ones?

Just now we were standing in a place where you could still see in the background the way it used to be. This area here was like that, exactly the same: a greater amount of old trees. If you look in that direction, you can see that there are a few left standing. Why these have stayed and the others are gone, I don’t know. But they did take the crowns out, probably for safety reasons. They take away these kinds of large trees and replace them with these kinds of cuttings, they are almost cuttings, they are called trees but these are things with a diameter of seven centimeters.

Yes, there’s a clear difference between such a big tree and these ones.

Yes, it takes 50 years before they get to a reasonable size, so it doesn’t really help. You can see that the entire soil has been churned up. Everything that stood here, that had come to rest here, has been destroyed. And then of course they say “it will be beautiful again”. Yes, in your lifetime it might, but in my lifetime it won’t be the same again. They have really dealt a heavy blow to this ecological zone, because that’s what it is. Of course, it is also a cemetery, and these two functions will have to go hand in hand, but this could easily have been done by pruning and working in an ecological way, and maybe pulling down a tree once in a while, or sawing out some dangerous branches occasionally. That’s possible, they have already shown that they can saw off the entire crown. This ecological approach can coexist perfectly well with the cemetery, but then you have to start looking at trees in a different way.

Which means no longer just cutting down 40 trees, but actually looking at each tree to see if there’s something wrong with it?

From what I understood they basically want to get rid of all the old poplars here. Fortunately, a few of them are still standing, next we’ll go to a place where they’re still standing. This cutting down will be phased over five years, each year dozens will be removed. We’re talking about hundreds of trees here, that’s really very serious. And there are even places where there’s no danger at all because nobody ever comes there, and these trees are also included in this big cleanup operation, because that’s what I call it.

So basically everything that happens here is in the service of human safety?

Yes, and also in the name of cleanliness, and because people want to plant beautiful young trees, because that’s also one of the reasons. Apparently there is money to rejuvenate, there is money to tidy things up a little bit, so the Dutch cleaning frenzy kicks in, which now prevails here in the cemetery.

Here we are, in front of a sign that says the Selwerderhof is part of the urban ecological structure. What does that actually mean?

I think it’s been 20 years since the municipality of Groningen decided that certain areas of green space, such as parks, should form an ecological structure. That means that the plants and animals can move in between these areas, and in this way the areas form a unified structure. There are some barriers in that unity, and there were even plans for removing these barriers. That was the intention. So that means that this is the connecting zone for the bats, this is the connecting zone for the ground beetles, and for everything else in the city in terms of ecology and nature. It should go without saying then that you shouldn’t abolish this old forest and start all over again, that would be weird. This is the one and only ecology of Groningen, the only piece of land that is really reserved for nature while the rest may all be built on. There may be some trees and some rose beds and some lawns in those areas, but this right here is the real ecological structure, and we are currently standing in an important part of this structure: the Selwerderhof.

Behind me there is a large area of barren land with a few newly planted trees, but it used to look like over there, where the big poplar tree stands. How long will it take before this looks the way it used to?

Well guess what, this takes 50 years. A blow of 50 years has been dealt to the development of this forest, this piece of ecological structure. Beautiful bushes have been planted in return for this, but the tufts that are here, I see a hawthorn and I see a willow, it will be a long time before they are grown. Maybe you can look over there, look, here is a somewhat older hazel. Luckily this one has remained standing, but I can only hope it stays and they don’t clear it out during the next round. But that thing, its stems are also at least 20, 25 years old, and the stump may be even older. Well, here everything is gone, really, everything including the tree stumps has been torn out of the ground. They even took out the stumps here with a big cultivator and they just left the ground completely bare. This is really a disaster for the ecological structure, and it’s a disaster for everything that has lived here. And then you shouldn’t say, because that’s what people tend to say, “but there are green areas in other places.” No, don’t talk about other places. We are already short of everything; the urban ecological structure is already a minimum, and you are going to subtract something from that minimum. It’s just not right. Groningen city council…, Groningen city council…, do something about it! Put your ecologists to work, and let the ecologists have their say, instead of the tree people.

Thank you for all the information.