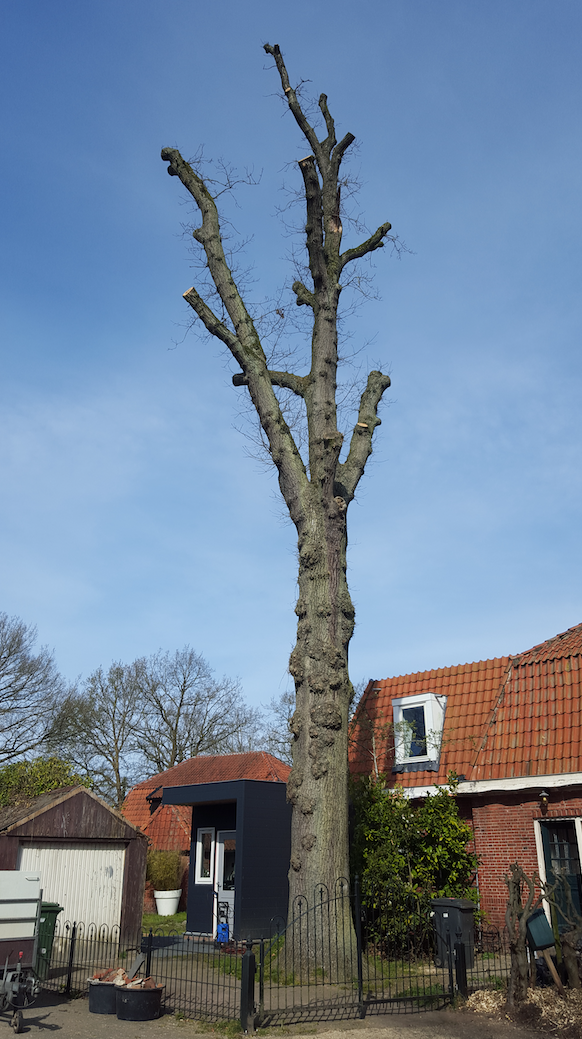 Is the Corona (COVID 19) virus detrimental to local trees? While there is no definitive answer, what appears likely is that more trees are cut illegally in the municipality of Groningen as well as pruned in ways that are deadly to trees. Some of the highly aggressive “pruning to kill” methods such as excessive crown raising and topping, are implemented by the municipality in recent years, in part to triple the wood refuse collected to satisfy the increasing demand for biomass as so-called “renewable energy” required by the many local biomass plants (“Beschikbaarheid Nederlandse Verse Houtige Biomassa 2030 en 2050”). The wide-spread visibility of such methods has likely stimulated copycat tree “care” patterns by private tree owners with extra time at home during this period of isolation.

For example, more and more private trees have canopies raised to dangerous and unstable heights. Further, once healthy crowns with vital environmentally beneficial foliage are transformed into emaciated “lion tailed trees”, or trees with bare trunks wherein all of the inner and structurally important branches are stripped to the ends, making these trees susceptible to the turbine effect during storms with their top heavy branches (Gilman et al). I’ve spoken with neighbors who’ve proclaimed that this particular trimming method is beneficial because, they claim, trees require such heavy “cleaning out” to regrow new foliage. While removing dead or diseased branches does aid a tree’s health, removing healthy branches does not. These are of course myths which in no way represent the reality of what trees actually need. The old adage that “snoeien doet groeien” (pruning stimulates growth) is often misapplied to trees (when pruning shrubs on a yearly basis can indeed be beneficial).

Further, increasing numbers of illegally topped trees are everywhere visible such as this one photographed today in Haren.

These people claimed they didn’t need a permit to do this (remove the entire crown in one pruning) as it was not a tree removal (only pruning). In one trimming, they removed the entire canopy, when international standards recommend never removing more than 15% of a tree’s crown in one season (“Pruning mature shade trees”). Topping is a discredited and deadly act which makes trees more prone to failure and death in the short term. Ironically, residents, including these, claim they pruned the tree in such a way to make it safer and to avoid branches falling on nearby automobiles.

Private tree removals too seem to be on the rise, but since many trees no longer require permits, such as in Haren, where a tree under 100 centimeters in circumference can be removed at will, we don’t actually know the consequence of such policies. But when looking around the streets of Haren for recent tree removals and comparing these locations to 3 or 4 years ago via google maps, it is evident that many residents are choosing to not only prune their trees in ways that are damaging and unsustainable, but they are removing many healthy middle-aged and vital trees deemed undesirable. One of my neighbors removed 7 healthy trees on his property after buying his house in 2017. No new trees were planted.

Today, another man was removing a medium sized birch tree in his front yard (see photo below), claiming he checked and it didn’t require a permit. This middle-aged tree still had many years of life ahead of it. He claimed he would plant a new (young) tree, a statement suggesting that the balance has been maintained. But we know that a mature tree of 30 to 40 years is 10 to 100 times more valuable than a young tree of 5 to 10 years. These values, measured in terms of greenhouse gas mitigation and pollution filtration as well as biodiversity are calcuable with iTree Tools among other programs available to municipal green departments, but in Groningen, no such program has been implemented. Not even yearly inventories of trees are maintained as if trees really aren’t that important for the climate and environmental challenges which lie ahead of us.

One thing is certain, the recent deregulation and liberalization policies in Haren, in Ten Boer (where permits are no longer required but for monumental trees) and in Westerwolde have led to an increasingly lax attitude about the value of mature trees. Quality tree care seems to be waning and the cherishing and preservation of older trees appears a lesser priority than gardens with tiles, lawn furniture, and sun blocking parasols. Let’s take this moment in this time of crisis to reflect not only only the global health of humans, but on the health of those local trees which help sustain us and those other beings with whom we share this planet.