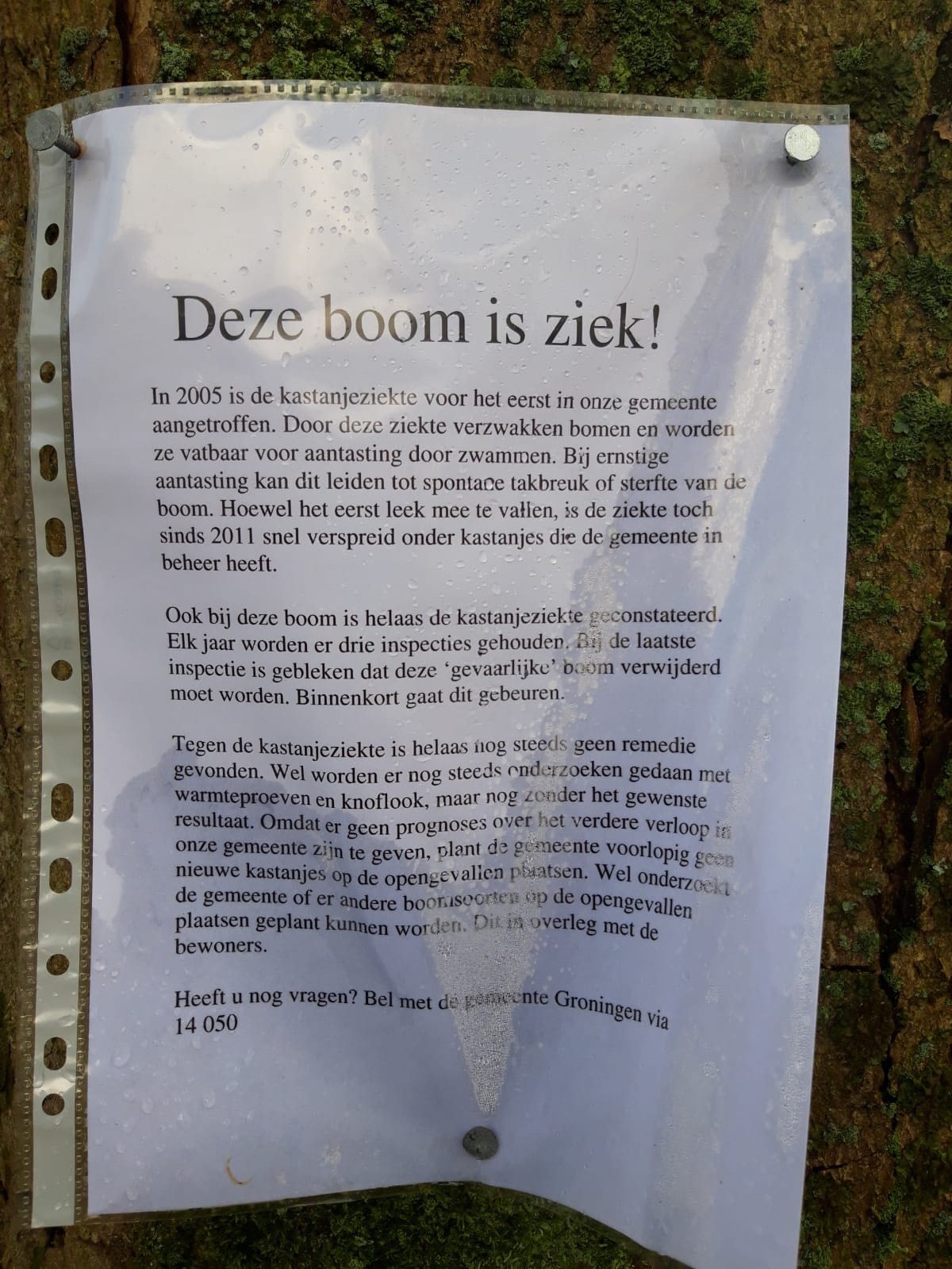 The municipality is currently felling hundreds of horse chestnut trees considered infected or at risk for infection of the bleeding canker disease (bloedingziekte). In Haren, for example, they have listed 24 trees with several already cut in recent weeks. Before felling these trees, the municipality had posted signs on tree trunks claiming that the tree is infected and that no cure has yet been discovered. However, several reports caution against the premature felling of chestnut trees and offer proof of potentially successful measures, through extensive study of particular regions where some trees have recovered (Percival and Noviss 2016). Further, two methods have already been found by Dutch researchers to potentially cure the pseudomonas syringae pv. aesculin bacteria including the heating of tree trunks and roots at 39c degrees such as detailed in this study conducted by Wageningen university (“Histological Examination of Horse Chestnut Infection by Pseudomonas syringae pv. Aesculin and Non-Destructive Heat Treatment to Stop Disease Progression” 2012). The other is the infusion of tree bark with a chemical known as allicin (Raats 2018). Apparently one tree researcher is already in conversation with the municipality about this method, yet he would not agree to speak with us on site to assess the trees slated for felling.

Researchers are currently testing both methods in several municipalities in the Netherlands, yet in Groningen it appears that only yearly monitoring of chestnuts is taking place, but so far no additional measures are being implemented. Rather trees with any indication of the disease are slated for removal and few to no resources are invested in curing these trees by investing in the proper conditions for optimal tree recovery such as decompacting and infusing the soil with important nutrients (Percival and Noviss 2016). Moreover, existing studies have claimed that removing infected trees fails at preventing the spread of the disease, so the current response seems unwarranted. Even worse, if tools are not properly cleaned after prunings or fellings, such measures can even increase the threat of the diseases’ spread (Percival and Noviss 2016).

The municipality refuses our request to visit the trees slated for felling with a chestnut tree expert, claiming there is no proven cure. This is a disappointing but consistent response from a municipality which seems more interested in increasing its cut quotas through a highly aggressive risk management policy, with little consideration of the much greater risks to the well-being and environmental health of local residents. Such proven risks include increased air pollution, damage from water-overflow, loss of biodiversity and heat islands produced by the gravely diminished canopy cover resulting from a decade of massive reduction of the overall tree population in Groningen.

In a recent study commissioned by the municipality (which they have since taken down from their website) about the integrity of current tree monitoring and felling procedures, the total number of publicly managed trees was listed as 113,000. Yet in the municipality’s report of 2010, it listed 180,000 street trees under its jurisdiction (Groen Peppers 2010). This suggests a reduction of public (mostly street) trees of more than 30 percent because of such aggressive anti-tree policies of recent years.

We hope the municipality drastically alters its current strategies to nourish and bring trees at risk back to health rather than rely upon the gravely over-used and fear mongering proclamations of “danger of falling branches and sickness” to cut relatively healthy trees whose vitality are only moderately diminished. While we understand that some trees will not be curable, what we have witnessed is a far too aggressive approach which has removed virtually any tree attracting even the most minor of complaint (falling leaves). With proper care and management, some if not many of these trees can recover and provide ample benefits to the local environment for decades to come. It is time that the municipality enlist real tree expertise to assess the local urban forest instead of relying upon little educated managers and construction workers motivated by financial interests (such as the tripling of harvested wood refuse for the local and highly subsidized biomass market).

“This therefore indicates that two approaches may be considered for suppressing disease: (1) employment of conventional plant protection techniques that rely heavily on treating the pathogen with specific biological or chemical agents; or (2) identifying management strategies designed specifically to increase tree vitality and so provide the tree with every opportunity to recover from Pae infection on its own merits. The following guidelines for Pae management are therefore recommended:

1. Inspecting for any external symptoms that could induce stress in trees i.e. new building construction and remediate if necessary.

3. Apply a suitable product to control HCLM. HCLM attack can reduce a horse chestnut tree energy budget by 30-40% that potentially can influence the energy available for defensive metabolite production.

4. Apply organic matter such as an under composed wood mulch to a 5-10cm depth. Ideally mulches should be applied to 1m beyond the canopy drip line if possible.

5. Guard against over and under irrigation. Use soil moisture levels to ensure soil water status is optimal for tree growth.