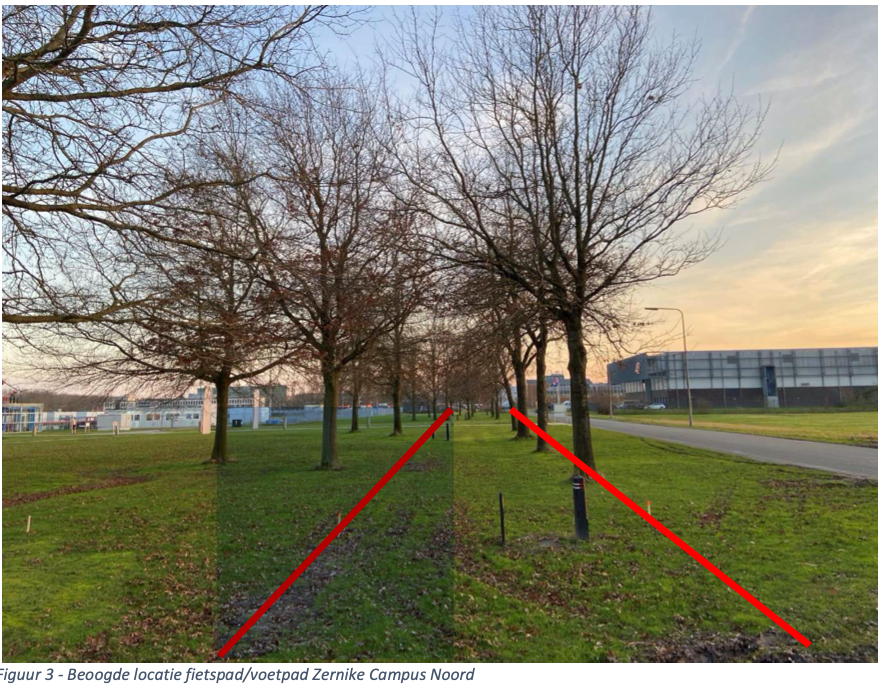 The new Zernikelaan project designed by the Rotterdam-based company West 8 for renovations to the Zernike campus is projected to provide a more sustainable, greener, and safer campus including new bike lanes, walking paths and the planting of new trees. At first glance, it appears ideal, as if together, the RUG, Hanzehogeschool and the municipality have materialized a vision in alliance with the city council’s new slogan Gezond, Groen en Gelukkig Groningen (Healthy, Green and Happy Groningen). The plans look very attractive on the university’s’ website where claims of increased sustainability abound.

Yet in December of 2019, on behalf of the university, the municipality requested a permit to fell 92 of the existing trees on the North campus and this occurred after dozens if not hundreds of trees have already been cut in the Zernike campus for new buildings including the “Green” Energy Academy as well as the felling of many municipal trees such as the over 150 trees on the Van Starkenborgh canal. Also, last year, in total, dozens of trees were felled in the RUG center campus near the Harmony complex, the academy building, and behind the social sciences building. The administration claimed that these trees were sick or dangerous and needed be cut, but this reason is almost always given and often such claims are exaggerated, when in reality trees can live decades longer, even those exhibiting the impact of many diseases. The university also failed to provide warning of these tree removals to staff and students. Many complaints were lodged after the trees had been removed.

In fact, the current standardized approach to tree management has meant that even middle-aged trees, such as these trees on the Zernikelaan, are generally cut without attention to their benefits, which far outweigh the possible disadvantages of older trees such as the need for increased monitoring and care. In general, the risk of accidents from older trees is far less than many other work related risks encountered by employees every day, and trees in these urban environments are proven to provide an immense increase in the physical, aesthetic and mental wellbeing of workers, all without posing significant danger to the public. Yet, in the last five years, an increasingly economically minded and generic “risk management” approach has prevailed over the cherishing of older trees gained through an individualized approach. In fact, the current strategy of Groningen’s green division (the same used by the RUG) plans to terminate trees before they reach the age of 30-40 years because of increasing maintenance costs (see the municipal’s letter “benutting biomassa 2013”). And this is certainly not a sustainable approach to a healthy urban forest, where, given the proper care, trees can live to be over a hundred or even two hundred years. There are plenty of examples of mature trees sustained in green cities such as in the UK or in Switzerland.

Certainly the 92 trees on the Zernikelaan are at the prime of their lives (with an average circumference of 35 centimetres and an age of only some 20-40 years) and they provide and will continue to provide myriad and calculable benefits for the environment from greenhouse gas sequestration, water filtration, shade, oxygen, and filtration of air pollution such as large particulate matter. They are also home to many animals and increase the area’s biodiversity. These benefits are all measurable with programs such iTreeTools which reveal the economic values of especially large-stature trees on the local environment – from avoiding water damage, to filtering air pollution, to cooling and heating buildings when needed. In relation to the climate crisis, they absorb a significant amount of greenhouse gases, one of the goals of a sustainable university and city. Further, once these trees are cut, they will certainly be burned as biomass, so not only will they no longer sequester greenhouse gases, their locked-up carbon will be released into the immediate atmosphere in biomass centres such as biomass plants on the Zernike campus.

Recently Martin Specken and Ward van der Houwen, both employed as lecturers a the Hanzehogeschool department of Industrieel Product Ontwerpen (IPO), and who see and enjoy these trees every day, have prepared an extensive dossier objecting to the felling of these trees. Nearly 70 colleagues employed by the RUG and the Hanzehogeschool in organizations like IPO and EnTranCe, as well as employees from Energie van Ons, Bio TX, Building, GOM and others, have signed a petition for the municipality requesting that alternative plans be considered. Not only have they contacted President Jouke de Vries but also the Wethouder van der Schaaf who have either not answered or ignored their requests. Rather van der Schaaf claimed during a council meeting and in an email that the current plans are ‘the most sustainable solution’ and will go forward. Specken and van der Houwen have in fact offered several viable and detailed alternatives to the existing plan which would protect the majority of the existing trees in the northern part of the Zernikelaan and enable new bike and walking paths to be constructed. But so far, these alternatives have not been considered nor acknowledged.

The Bomenridders has also lodged an objection and a hearing is planned for the 28th of February to consider complaints against the felling of these trees. Everyone is invited.

Unfortunately, appointments to speak with others including the project leaders, with the city’s green division and with the president of the University of Groningen have not been forth coming. And despite much talk about creating a greener and more sustainable campus and university, these plans and many others before them have appeared to favour prestigious and expensive new buildings over the preservation of existing wilderness and local trees, especially those large-stature and middle aged trees that are optimized to provide the most benefits to the climate and to the local environment in comparison to any newly planted younger trees.

The Boomwachters and many of the staff of the RUG hope that university takes a more serious and ecologically minded approach that considers the educated ideas of its employees, of its students, and of all of those who live and work nearby and are impacted by its large-scale projects. The current strategy of building, building, building in place of renovating and preserving is not sustainable. Rather with the university’s Green Office, we can think more about consuming less and cherishing what is already here – and especially our trees – whose benefits are often underestimated and unnoticed. Trees should and need to be considered earlier in all new plans – even if this entails an extra initial investment.

We take to heart the new president’s offer, articulated in his interview last year in the UKrant (March 13, 2019), of wanting to hear from current staff and employees. However so far, it appears that the existing hierarchies and channels of communication have only been further reified – and certainly not to the benefit of a truly democratic and more sustainable and greener university campus.

Kristin McGee is Associate Profess of Popular Music Studies, as well as the chair of the Boomwachters Groningen and a collaborating staff member of the Green Office. She hopes to enter into dialogue with university administrators with ideas of how to protect existing trees and plant new ones in light of the many proposed new projects in the center and at the Zernike campus.