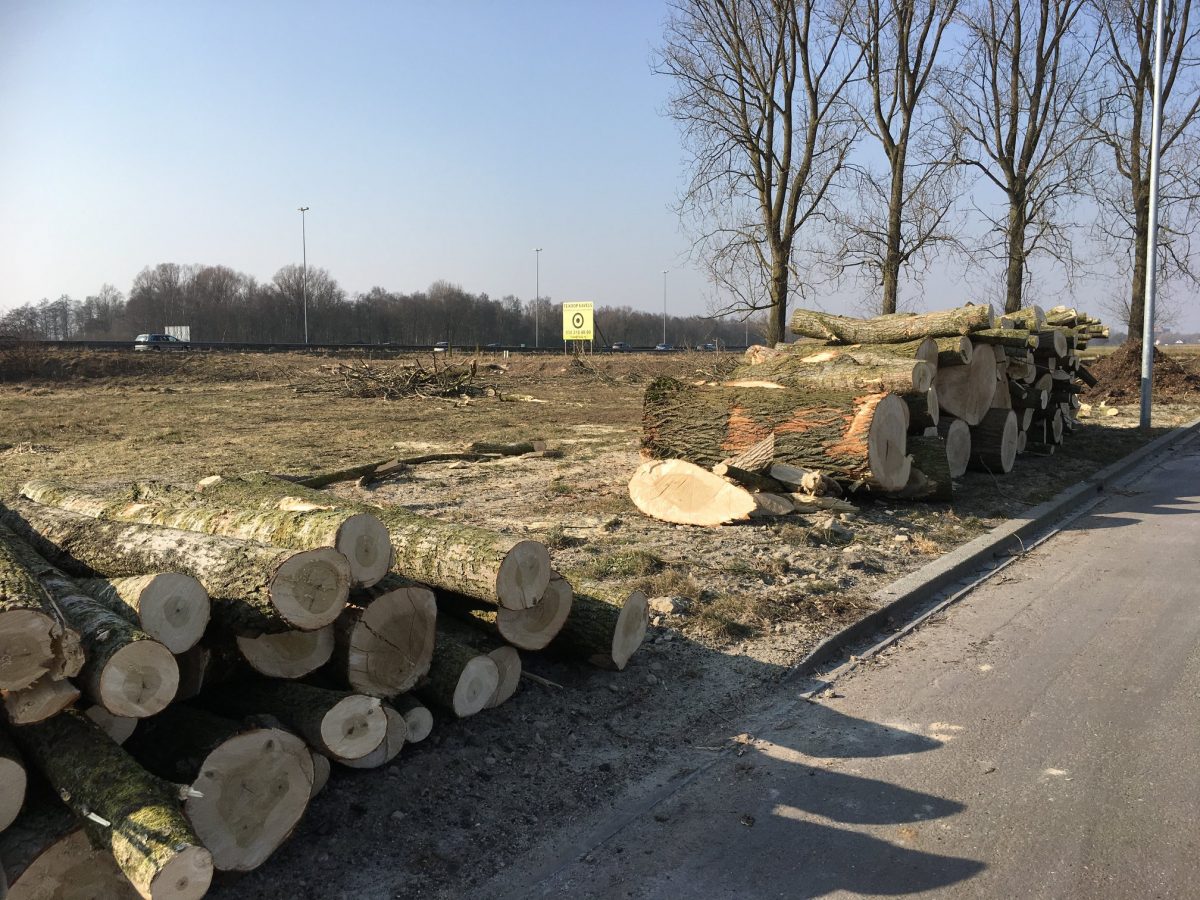 In the province of Groningen, a full-fledged attack on trees is underway. If you haven’t noticed it – you must be slightly dead inside. It began with an increase in the number of trees felled annually, to the liberalization of felling regulations, to the denuding of the nature law (you can now cut during nesting season), to the increased freedom given to the Staatsbosbeheer and other semi-private organizations (natuur monument, landschaps beheer) to ‘manage’ nature reserves at will. In many cases, these organizations are no longer even required to inventory the trees they remove from our parks or forested areas. Most recently this green attack is painfully noticeable on our streets- and in our parks where the crowns of urban trees have been raised to unseemly heights. Or even worse, trees are topped, knotted, ‘lioned tailed’ (hollowed out) and pruned in the most bizarre ways – resulting in lopsided, irregular, ill-formed crowns. In some cases, the municipality has raised the crown up to 7 meters high, and thick structural branches (up to 30 centimeters thick) are removed, making trees vulnerable for rot, infestation and disease. The city’s green department claims these measures meet national regulations required for visibility, which require tree crowns raised to 4.5 meters on streets and 2.5 meters on sidewalks, but our ‘European Tree Technicians’ now regularly extend these to 5 meters on side-walks and to 7-8 meters on streets. The crown to trunk ration gets smaller and smaller as the weeks go by.

Does this make our trees safer? Or is it rather necessary to make them ‘harvest ripe’ on a much faster time-line? In fact, the current maintenance of our trees is making them sick, compromised, unstable, and unsafe, and yes ready for felling. Even only a few years after these new aggressive pruning methods have taken over the entire nation (itself committed to these new standardized pruning methods), trees exhibit diminished growth; more dead branches hang woefully from their trunks, and gaping holes appear within canopies as a result. These trees will never live to be as old as their parents.

The reasons for the full-fledged attack on our trees are not difficult to surmise. They can be deduced from the many renewable energy plans, and from advice documents published since 2012, beginning with a very telling document entitled “Benutting Biomassa” – a proposal to the city council by the department of “beheer and verkeer,” which suggests the cities’ green workers be more ‘creative’ in their pruning methods in order to harvest more wood for biomass. After reading this document, we began investigating what impact the push towards biomass has had on the urban forest. One of developments occurred around 2017 with the new high-tech biomass oven at Kardinge, one of the five sport schools now committed to biomass in the municipality. Our visit there confirmed what we already suspected – that the municipality was currently contracting the staatsbosbeheer to organize collecting, chipping and distributing wood from throughout the city to sell for fuel in ovens such as this one. In fact, the municipality collects on average about 4000 tons of wood in one year. Our contact at Kardinge confirmed that 400 tons of the city’s yearly collected wood ‘refuse’ was used in this one facility and even here – this was still not enough to cover even half its yearly energy needs. The implications are obvious, biomass will never be a realistic source of renewable energy.

Since the climate accords in Paris, the city, and in fact the entire nation, has committed itself to moving quickly towards so-called ‘renewable’ energy sources, and biomass appears the favored choice. By 2035, Eemshaven wants to produce energy completely from biomass and preferably from local ‘sustainable’ sources (Probos). By 2050, the province aims to produce all of its energy from renewable sources, especially biomass, next to wind and sun (“Vol Ambititie – weg naar de transitie 2018”). This, despite warnings within the scientific community (KNAW, Zembla, Nature…) of wood burning’s severe consequences from increased pollution, deforestation, and health problems (asthma and bronchitis) to a devastating loss of biodiversity and wildlife. In short, this proposed solution will prove catastrophic for humans, animals and the environment. But we are already seeing the negative consequences of this push towards biomass on our streets, and in our parks and forests.

The Bomenridders receives daily mail from residents who too have witnessed the full-fledged attack on local trees. They’ve sent us pictures of mangled crowns and sun-burned trunks. They’ve written us emotional stories detailing their admiration of beloved trees once standing proudly near homes, and how such affection turned to shock and grief upon seeing trees splayed out like corpses whose limbs were instantly pulverized through powerful, war-like machines. With tears in their eyes and tremors in their voices, they’ve told us of the rage they felt for the carelessness with which 100-year-old trees were felled or ‘pruned.’ They’ve asked us why their complaints were ignored or condescended to with universal claims of “we know better” or of the alleged ‘sickness’ or ‘danger’ posed by felled trees. Or they’re told “don’t worry, a new one will be planted”.

I too have felt all of these emotions, a sign of my humanity I hope, and perhaps something biological warning me of our growing precariousness on this planet without the benefit of large, old trees, protecting us from harsh environments. Increasingly, I feel like an alien in my own city as I try to avoid looking up at those pathetic hollowed out trees left standing on our streets and in our parks. If I catch sight of one which still seems untouched by the poisoned hands of our “green workers” my heart skips a beat, but then I think, it’s only a matter of time before they get this one too – as with this new disastrous policy – it appears that no tree is safe, no tree will be left behind. No – in this time of crisis, trees are mere objects to be standardized, managed and harvested far before they reach maturity. It appears that old trees, like many thousands of other living species, are becoming a thing of the past.